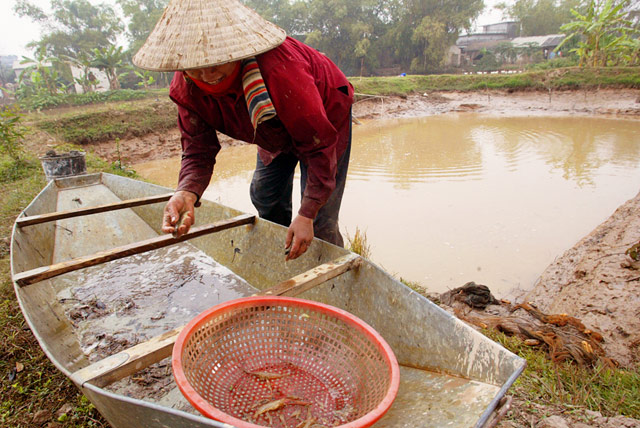 In a major breakthrough, researchers at the University of Arizona have identified the causative agent behind a mysterious disease that has been decimating shrimp farms in Asia. The disease, known as Shrimp Early Mortality Syndrome (EMS) or Acute Hepatopancreatic Necrosis Syndrome (AHPNS), has over the past two years caused large-scale die-offs of cultivated shrimp in several countries in Asia, where 1 million people depend on shrimp aquaculture for their livelihoods.

In 2011, the Asian region produced 3 million tonnes of shrimp, with a production value of $13.3 billion. Infected shrimp ponds experience extremely high levels of mortality early in their growing cycle — as high as 100 percent death rates in some cases.

So far, the cause of the illness has baffled scientists, animal health authorities and farmers, making prevention and treatment difficult. But now the identity of the culprit has been cracked: a strain of a bacterium commonly found in brackish coastal waters around the globe, Vibrio parahaemolyticus.

A team of researchers at the University of Arizona have managed to isolate the strain and use it to infect healthy shrimp with EMS/AHPNS — a scientific method known as Koch’s Postulate and the epidemiologist’s equivalent of a smoking gun.

“We succeeded in isolating a pure culture of the V. parahaemolyticus strain and reproduced the EMS/AHPNS pathology in our laboratory,” said Prof. Donald V. Lightner of the Aquaculture Pathology Laboratory at the University of Arizona (UA). “The high virulence of this agent to shrimp may be due to a phage which affects this particular strain of V. parahaemolyticus,” he added.

The effort to study EMS, identify its pathology and respond to EMS was supported by a coalition of partners including UA; FAO; the World Organisation for Animal Health (OIE); the World Bank; the Network of Aquaculture Centres in Asia-Pacific (NACA); the Global Aquaculture Alliance (GAA); the Ministry of Agriculture and Rural Development of Viet Nam; CP Foods; the Minh Phu Seafood Corporation; Grobest Inc. and the Uni-President Feed Company.

This breakthrough finding by UA of a bacterial aetiology is a crucial first step in finding effective ways to combat EMS.

EMS/AHPNS initially surfaced in 2009. By 2010 outbreaks had become serious. In China in 2011, farms in Hainan, Guangdong, Fujian and Guangxi suffered almost 80 percent losses. In Thailand, shrimp production for 2013 is predicted to be down 30 percent from last year due to EMS. Production on some farms in eastern parts of the country has been cut by 60 percent.

FAO first fielded a mission to Viet Nam through its Crisis Management Centre for Animal Health to investigate the disease in 2011 which pointed to an infectious agent and since 2012 is implementing an emergency technical assistance project in Viet Nam.