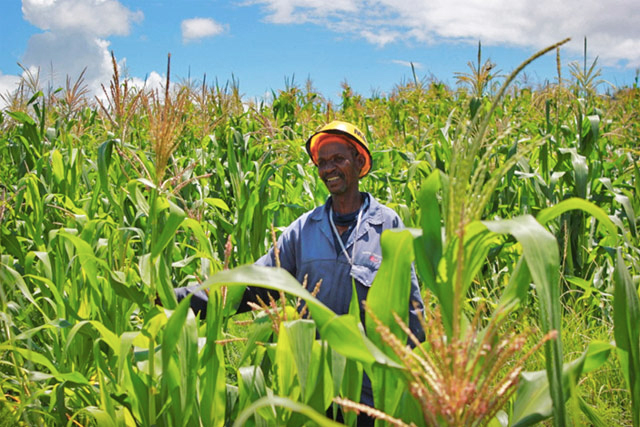 When Paul Motseki saw how well the farmers in a neighbouring area were doing – they had strong, quality plants and good yields – he decided to copy their method of farming, using Conservation Agriculture (CA). He had not heard of it before but the success of his neighbours encouraged him to try it out.

Motseki was selected to become a participant of the emergency programme of the Food and Agriculture Organization (FAO), funded in 2012 by the European Commission Humanitarian Office (ECHO), Belgium and UN Central Emergency Fund (CERF). The programme will continue in 2013 thanks to ECHO and the Department For International Development (DFID).

He lives in Mahobong, about 100km from Maseru, in the Leribe District of Lesotho. He owns a horse, a donkey, poultry and 10 cows, four of which are used for farming and the other six for milking. He grows maize, sorghum and beans. Since he started farming, Motseki has always used conventional methods. But last year he decided to dedicate 0.2ha of his land to CA. He was so happy with the results that he is continuing to use the CA method.

“In conventional farming, I can harvest 960kgs of maize on 1.6ha of land. With only 0.2ha of land in conservation agriculture, I get the same yield!” he said, enthusiastically. “I also noticed that the quality of the crops is better in Conservation Agriculture than in conventional agriculture.”

Practicing CA implies respecting three principles: minimum soil disturbance, crop rotations and soil cover. Motseki said that he does two of them. “I dig basins for minimal soil disturbance and I leave the maize stem on the land after harvesting, as mulch. I use the top of the crops for feeding my livestock.” He wants to do crop rotations in the next season. Motseki is the Lead Farmer of a group of 17, six men and 12 women. When asked why he was chosen, he said: “They chose me because I am a hard working farmer!”

The group works closely together. They help one another to prepare their lands, before the planting season. “We dig the basins for the seeds and fertilizer of about three lands every day, altogether, until all lands are ready.” Motseki heads a family of 10. Fortunately six of his children are married and do not depend on him anymore. He takes care of two children and his mother who stays at his home. His wife died the last year.

At the age of 66, Motseki produces enough to cover the needs of his family and he sells the excess to the neighbouring villages. He also has a home garden where he grows tomatoes and other veggies. He sells most of them during the peak season. “Most of my cereal production is under conventional agriculture,” says Motseki, “but I want to change that. The biggest challenge with CA is digging the basins to prepare the land. It is a lot of work! As I am getting older, I count on team work and motivation to develop conservation agriculture on my land.”