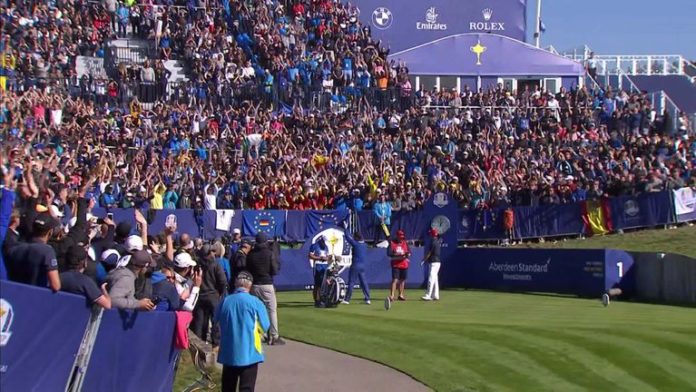 Harrington: “We all grew up with those feelings of wanting to be a hero, and it’s our one chance where we get it.”

European Ryder Cup captain Padraig Harrington says playing this year’s edition without the “buzz” generated by fans would deny players the opportunity of becoming a “hero”.

The biennial competition remains set to go ahead from September 25-27 at Whistling Straights, although concerns remain over whether fans will be able to attend due to the coronavirus pandemic.

Harrington, who along with US counterpart Steve Stricker are against the event being played behind closed doors, is hopeful it is staged with fans as scheduled, albeit he accepts the decision will ultimately rest with the organisers.

“Nobody wants it to happen without spectators,” three-time major champion Harrington said.

“You get the partisan crowd supporting us or against them. It’s like being in a football match.

“We all grew up with those feelings of wanting to be a hero, and it’s our one chance where we get it. It’s the spectators that drive that.

“The team atmosphere, the adrenaline, the buzz you get from the crowd. For us, that’s our payback.”

The coronavirus has forced a suspension to both the European Tour and PGA Tour, while three of the year’s four majors have been rescheduled with The Open in 2020 cancelled.

Other than in wartime, the only occasion the Ryder Cup has been postponed was when the 2001 edition at The Belfry in England was postponed for a year following the September 11 attacks in New York and Washington.

Would fan-free Ryder Cup be so bad?

As calls grow for the Ryder Cup to be postponed if fans can’t attend, David Livingstone puts forward his case for the tournament going ahead regardless.

PGA of America chief Seth Waugh has said the Ryder Cup may have to be played without spectators and Harrington says he has shared his opinions with the event organisers.

“I’ve been very much involved,” he said.

“They ask me for my opinion which I’m sure they take to the meetings. But ultimately it is slightly above the pay grade of a captain.”

With the European Tour not scheduled to return to tournament action until the end of July at the earliest, uncertainty remains over the qualification system.

Europe was set to include the top four on the European Tour list, the leading five on the world points list and three captain’s picks, but that could now change.

“We’ve had half a dozen [mathematical] models depending on when they restart,” said Harrington, who in April admitted he would be happy to pick his 12 players for September’s contest.

“The biggest thing is that they’re fair.”