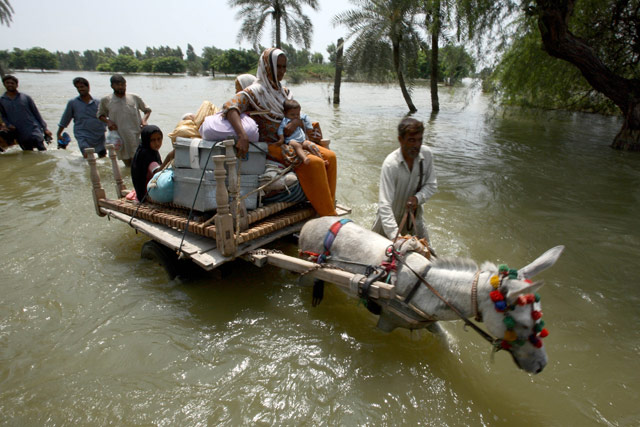 The Food and Agriculture Organisation (FAO), the International Fund for Agriculture Development (IFAD), and the World Food Programme (WFP) are working together to address urgent  food security challenges in Pakistan, following the recent flood disaster which destroyed food stocks and approximately 10 percent of the country’s standing crops, leaving an estimated 10 million people vulnerable to hunger and malnutrition. Cooperation between FAO, IFAD and WFP is a fundamental part of the recovery effort.

FAO, IFAD and WFP are working swiftly to mobilize resources, logistics and capacity on the ground to address immediate  and longer-term food needs. Together, the agencies are ramping up complementary programmes such as emergency food and nutritional assistance, distribution of agricultural inputs such as seeds, animal feed and veterinary supplies, rehabilitation of damaged land and agricultural infrastructure and microfinance activities.

These programmes, which require generous and sustained donor support, will provide immediate food assistance while helping the government to invest in agriculture and safety nets in order to address hunger and food insecurity exacerbated by the recent natural disaster.

WFP reached 3 million flood affected people with food rations during August and is scaling up to reach six million this month, particularly through an expansion of operations in Punjab and in Sindh, which remains largely under water. The monthly family food rations include nutritious ready-to-use food supplements for children, who are at particular risk of malnutrition. As flood waters recede, WFP will assist families and help them meet food needs as they rebuild their livelihoods, including through school meals programmes.

WFP will also lend its logistics expertise and network in Pakistan to assist the government and FAO to reach Pakistani farmers with seed kits and other tools in order to take advantage of the crucial upcoming wheat planting season and to provide support to rehabilitate damaged agricultural land and infrastructure. Wheat is the staple food of Pakistan, providing 60 percent of average protein and carbohydrate requirements.

With 80 percent of the flood affected population dependent on agriculture for their livelihoods, loss of stored seeds, grains, and animals has rendered farming families extremely vulnerable. Although water still stands in many of the affected areas, planting of the critical annual wheat crop, to be harvested  next year, can take place where the water has receded.

FAO is currently reaching 1.6 million people in these areas with distributions of wheat seed, fertilizer and vegetable seed kits, as well as as animal feed and veterinary supplies for livestock. With increased donor support, the agency could double the number of families it reaches with immediate assistance in the coming months.

IFAD-funded programmes and projects in Pakistan work to improve the livelihoods and productivity of poor rural people. The organisation currently has five ongoing projects in the country, four of them worth over $100 million have been affected by floods. IFAD supported operations are located in the most vulnerable flood-affected areas, often reaching the  most disadvantaged communities, particularly those in remote and marginalized areas.

The devastating floods in Pakistan have affected overall more than 20 million. Pakistan is a country already prone to food insecurity.

The risks of hunger and malnutrition are particularly acute among those who spend more than 60 percent of their income on food, such as poor urban people, displaced populations, rural landless people, pastoralists and the majority of smallholder farmers. Limited access to food obliges people to switch to poorer diets and resort to other harmful coping mechanisms: children, in particular girls, are taken out of school and forced to work; families fall into debt, sell their assets, resort to over exploitation of natural resources, or are forced to migrate in search of  income, ultimately falling into destitution.