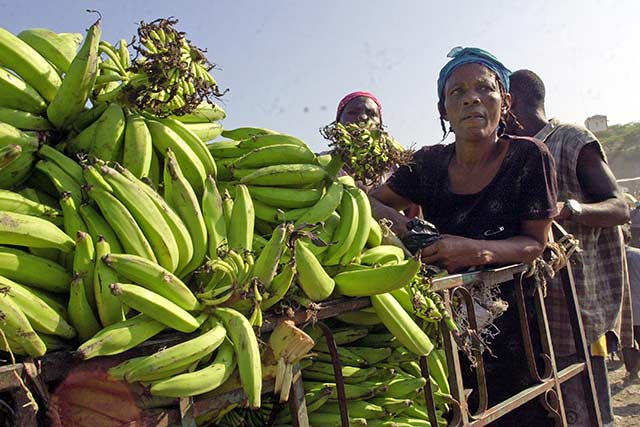 Food production in Haiti is slowly recovering but still remains significantly below the levels that existed prior to the January 2010 earthquake, according to the report of an FAO-WFP joint assessment mission released today. Haiti’s 2010 spring harvest, compared to 2009, saw bean production drop by 17 percent and declines in maize, sorghum and plaintain of eight, four and five percent respectively, it found.

Forecasts combining the spring harvest with expected production from the summer season suggest that Haiti‘s overall crop output for 2010 will be about 1.2 million tonnes of root crops, 503 600 tonnes of cereals, 313 200 tonnes of plantain and 148 000 tonnes of pulses. This represents a reduction of 12 percent, 9 percent, 14 percent and 20 percent, respectively, compared to 2009.

The FAO/WFP team estimated Haiti’s total food import requirement for the 2010/11 (July/June) marketing year at 711 000 tonnes (in cereal equivalent) of which 525 000 tonnes are expected to be imported commercially. This leaves an uncovered deficit of about 186 000 tonnes.

Still, despite the damage to Haitian food production systems and a late start of the 2010 spring rainy season, subsequent rainfall was generally favourable and supported agricultural recovery. “Levels of food production could have been much worse,” said Mario Zappacosta, an economist with FAO’s Global Information and Early Warning System on Food and Agriculture. “Timely provision of food assistance and agricultural inputs coupled with decent weather, have enabled farmers who were affected to start getting back on their feet.”

In affected irrigated areas, where water supply and the availability of fertilizer, seed and credit have improved over even 2009 levels as a result of assistance from FAO and other members of the UN agricultural cluster for Haiti, an estimated 15 percent increase in rice production is expected, he added.

Myrta Kaulard, WFP Country Director in Haiti, said: “It is very encouraging that in such a difficult year, the agricultural sector has maintained a good performance. There is still a lot of work to do to improve food security in the country. These good results confirm that we are on the right track to allow Haitians better access to affordable and nutritious food.”

Some gains in food security

In areas directly affected by the earthquake the percentage of households resorting to non-sustainable survival strategies has fallen from 52 to 39 percent, the assessment team reports. Additionally, the percentage of households with poor and limited food consumption also dropped from 31 to 27 percent – although this is still higher than levels existing prior to the disaster.

These improvements came through a combination of food assistance, distribution of seeds and fertilizers, the creation of cash/food for work income-generating activities and the resumption of some agricultural and non-agricultural food trade.

FAO and the Ministry of Agriculture distributed agricultural inputs to 72 000 farming families in earthquake-hit and rural areas in time for the critical spring planting season, which accounts for 60 percent of Haiti’s agricultural production. This assistance has enabled over 360 000 people to produce and consume their own locally produced food, selling the surplus to cover health and education expenses.

FAO and the Ministry of Agriculture are leading the agriculture cluster, a humanitarian community coordination mechanism which spearheads not only immediate assistance but also the reconstruction efforts in agriculture to address the root causes of food insecurity in Haiti and involves over 170 non-governmental and international organizations. The cluster has been working during the summer planting season to reach an additional 80 000 rural families with tools, fertilizers, water pumps and high quality seeds.