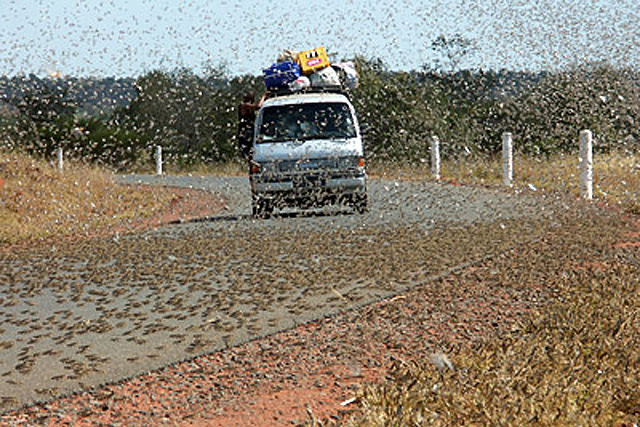 Madagascar is at risk of a significant plague of crop-eating locusts, FAO warned today. An unknown number of immature swarms of Malagasy Migratory Locust (Locusta migratoria capito) have formed up and moved out of the country’s south-western corner, where they are usually contained, and have begun to spread east and north, as far as Maintirano.

The government estimates that 460 000 rural families are potentially at risk. A major, months-long control campaign will be necessary starting in advance of Madagascar’s upcoming rainy season, which begins in mid-October, to stop locust numbers from growing and prevent them from reaching plague proportions.

Madagascar is currently in its dry and cool season, which is unsuitable for locust breeding. But the wet and hot weather of the rainy season – which lasts until spring – will favour rapid reproduction. Given suitable conditions, locusts can produce a new generation roughly every two months and up to four during one year.

The UN agency fielded an assessment mission to the island to assess the issue last week which confirmed, in close coordination with the national authorities, the seriousness of the situation and the need to initiate aerial surveillance of the movement of the locusts by early September.

Some 15 million USD in funding is urgently needed to mount a major campaign by ground and by air on an estimated half a million hectares of land, according to FAO. FAO has already activated the necessary mechanisms to mobilize human and physical resources and to preposition inputs and equipment in the country waiting for the initiation of the operations

Locusts do not always stay in swarms – in south-western Madagascar, they typically live on their own as individuals. But if their population density passes the tipping point, a locust’s body chemistry changes and it undergoes a behavioural, ecological and physiological transformation.

Individual locusts begin to concentrate and act as synchronized groups of hopper bands (groups of wingless locusts) or as adult swarms, moving out en masse to find new sources of food capable of supporting their numbers and suitable for breeding. Their bodies change as well, allowing them to fly over greater distances – up to 100 km a day. And they become able to digest a wider range of vegetation and crops.

An adult locust can consume roughly its own weight in fresh food per day – about two grams. A very small part of an average swarm eats the same amount of food in one day as about 2 500 people.

Responding quickly to locusts once they start swarming is both the most thorough and cost-effective way to deal with the problem, according to FAO. During the 2007-2009 period countries in the Red Sea region who invested in locust crisis preparedness, to the tune of 20 million USD, successfully prevented the Desert Locust upsurge developing into a plague. Countries in North and Northwest Africa did not when the upsurge started in 2003, and ended up spending around 400 million USD to bring the upsurge under control in 2005.