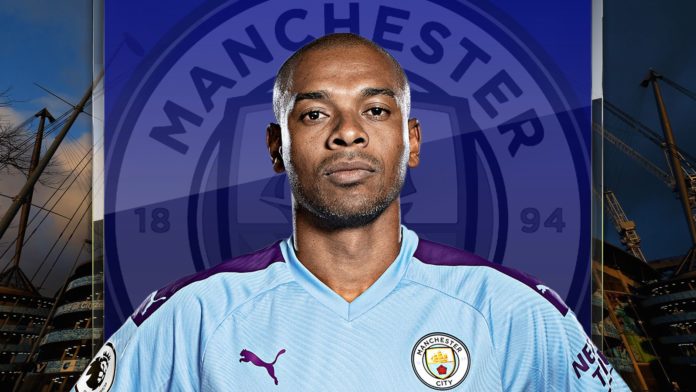 Fernandinho tells Sky Sports about switching from midfield to centre-back under Pep Guardiola, mentoring Manchester City’s next generation of stars, and his unusual route to the top

Fernandinho is back in Brazil, spending the lockdown with family in the north-east of the country as he waits for football’s return. It is, he says, a “different way of living”, far from the pressures of the Premier League. But when the time comes to return to Manchester, he will be ready.

“I asked permission from the club to come here and spend this time with my family and they allowed me to travel,” he tells Sky Sports via video call. “It’s quite hot over here. The weather is pretty good and there is space to run, to kick the ball and do some exercises and that’s good for keeping fit.

“I’m in contact with the club most of the time. The doctor texts us every morning, asking how we are doing, how our families are doing. The staff, the physio guys, and the guys who work in the gym are also in touch with us, supplying some exercises. That’s how we are living now.”

The players are doing what they can to remain sharp. The priority, though, is simply to keep safe and look after loved ones. And if anyone at Manchester City has earned a period of rest and recuperation, it is Fernandinho.

The Brazilian has been a near-ubiquitous presence in the Manchester City team over the last seven seasons, playing a pivotal role in three Premier League title triumphs, racking up more appearances than any other player and, at 34, mastering an entirely new position from scratch.

The transition from midfield to centre-back was borne out of necessity.

Fernandinho enjoyed perhaps his best season yet in 2018/19, his outstanding performances at the base of Pep Guardiola’s midfield earning him a place in the PFA Team of the Year. But when Aymeric Laporte suffered a knee injury in August, his services were required further back.

It was viewed as a temporary solution. A desperate response to an injury crisis. Eight months on, however, and Fernandinho has become City’s top-performing centre-back, earning a one-year contract extension along the way. The only drawback for City is that his presence has been missed in midfield, such is his enduring importance to the side.

“I think the biggest challenge of moving to centre-back for me was that, as midfielder, you are used to running a lot in front,” he says. “You go to the battle in the middle and you can lose the ball or you can win the ball.

“But at centre-back, you have a lot of space behind us, between the central defenders and the goalkeeper, and you have to pay attention to that because most of the teams who come to play against us look to play those kind of balls behind the back four. For me, at the beginning, it was a little bit strange adapting to that, but afterwards I was able to do it.”

He puts his swift adaptation down to Guardiola. The Catalan’s meticulous approach can be exhausting for players, but the benefits are obvious.

“I always say that the difference between him and the other coaches I’ve had during my time in football is that he looks at the smallest details,” says Fernandinho. “He gives you the information you need about the opponent and of course about yourself, and he spends a lot of time looking at where to find spaces and where to close spaces to create difficulties for the opponent.

“That’s important because the game we see, as players and coaches, is a bit different from the public who go to the stadium or watch the games on TV. Those details help you to improve, to perform better and to help the team.

“I now have to talk to the guys in front of me, to tell them to keep going. That’s another of the ways he has helped me during this time. But also, the principle of the game is still the same. We like to play with the ball, and when we don’t have the ball, we try to recover it as soon as possible.”

Few players have interpreted Guardiola’s way of playing as well as easily as Fernandinho. It’s why, within months of taking the job in 2016, Guardiola said he wished he had three of him. Those comments have felt particularly pertinent this season. Fernandinho made his job look easy in midfield, but it is telling that even the £63m Rodri has found it difficult to fill the void.

It is not just on the pitch that Fernandinho retains a crucial role for City.

Since Vincent Kompany’s departure, he has been their de facto captain, wearing the armband more commonly than David Silva. Guardiola described him as “our leader” earlier this season, and his experience and knowhow have been particularly valuable to City’s younger players. “He always looks after us,” said countryman Gabriel Jesus in December.

“This is still there in my head. I can hear the voices of those players talking to me at that time. So I know how important the senior players are for young players. Sometimes, not just in football but in life as well, something can happen and some people are not ready to deal with the bad moments.

Schooling and silverware in Ukraine

That outlook has served Fernandinho well throughout his career, particularly when he moved from Brazil to Ukraine to sign for Shakhtar Donetsk at the age of 20. It was a dramatic departure from his comfort zone. The surroundings could hardly have been more alien. But he threw himself into the challenge and now looks back on it fondly.

“It was a completely different country, culture, weather,” he says.

“Everything was different. I had the support from my team-mates, from the coach, but I was also open to learning, you know? I was always like that and I think it helped because I paid attention to everything the coach said and then tried to put it into the training sessions and of course the games.”

Fernandinho went on to spend eight years there. He was 28 by the time he joined City. But he shakes his head when asked if he regrets not moving to a major European league sooner. Instead, he is proud of his achievements alongside a sizeable contingent of Brazilian players at Shakhtar and believes the time there made him the player he is today.

“In eight years, we did a great job there,” he says. “I made a collection of friends that I still have now. When I look back, I am so happy because we won a lot of trophies. We won the UEFA Cup, we played in the Champions League quarter-finals. It was prestigious for us to do that in Ukraine with a lot of Brazilians. I learned so much and I will be grateful to the club forever.

“I always say in my life, things have happened at the right times. Before I came to Manchester City, I had some offers from some other clubs, but most of them didn’t come to me directly, most of them went to the club and the club never showed any intention to sell me.

“Eventually the time came when I went to talk to them and said, ‘Look, I think I have done my job here and it’s time to take another step.’ I told them that if they accepted City’s offer, I would be happy and everyone would be happy. They agreed and we had a nice conversation. I think it was a very good decision for everyone.”

That’s certainly true for Manchester City. The £30m deal which brought him to the Etihad Stadium in 2013 will go down as one of the best signings in their history and, while he turns 35 next week, recent evidence suggests he is more important to them than ever. Kevin De Bruyne said recently that football’s interruption due to the coronavirus pandemic has made him want to extend his career. Does Fernandinho feel the same way?

“First of all, I just want to get back to work and play again. I extended my contract a couple of months ago and I am so happy, but after that, we’ll see.

“Manchester City will always be in my heart. That’s for sure.”