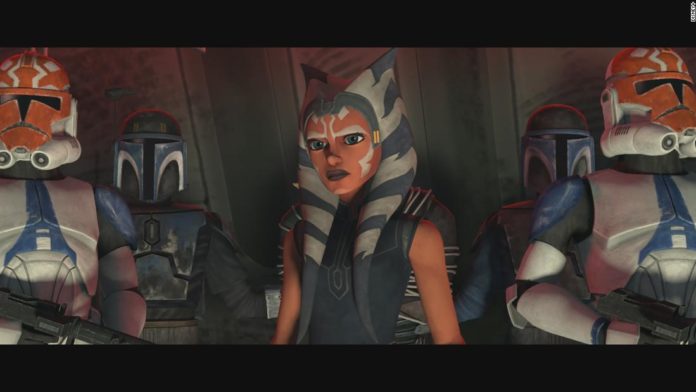 The four-part finale, airing on the streaming service Disney+, has largely charted those events from the perspective of Ahsoka Tano (voiced by Ashley Eckstein), the padawan to Anakin Skywalker’s Jedi knight. As an added bonus, the plot has incorporated Maul (Sam Witwer), the apprentice to Darth Sidious who improbably survived his lightsaber battle in “The Phantom Menace.”
Although Ahsoka previously appeared in the animated series “Star Wars Rebels,” which unfolds later in the timeline, her whereabouts during this stretch had remained unknown. It is, in essence, the rest of the story, at least for those who followed “Clone Wars” — which premiered in 2008, before George Lucas sold Lucasfilm to Disney — through its six earlier seasons.
After a new episode May 1, the “Clone Wars” finale will appropriately premiere on the de facto “Star Wars” holiday known as May the 4th. The entire season has been a labor of love for executive producer Dave Filoni (who also wrote the final episodes), the creative architect behind Lucasfilm animated efforts like “Clone Wars” and “Rebels” before teaming up with Jon Favreau to produce the live-action hit that made “baby Yoda” a ubiquitous meme, “The Mandalorian.”
In terms of blocking out the final chapters, Filoni told CNN, “I like to have some kind of end goal in sight, and frankly, it’s where the story has to end.”
The episodes nevertheless presented a kind of jigsaw puzzle, filling in parts of the story that occurred around the events of “Revenge of the Sith.” At one point, a scene from the 2005 movie is replicated before revealing what happened almost immediately after that.
Given the extended lapse in production, Filoni acknowledged that keeping up with all the continuity of “Star Wars” lore required brushing up on his old notes. The episodes also incorporate Order 66, that moment in “Revenge of the Sith” when the Emperor instructed the Clone army to turn on the Jedi.
“You get to see some events you know really well from a different point of view,” Filoni explained.
For “Clone Wars” fans, the character of Ahsoka has been one of the most enduring developed outside of the original trilogy, creating a hunger for more of her. Speculation has persisted that she will pop up again — including reports that Rosario Dawson will portray her in the second season of “The Mandalorian.” Dawson danced around the question in a Variety interview.
Filoni attributed that bond partly to the fact that Ahsoka was a teenager when introduced in “Clone Wars,” allowing those who watched the show as children to “have grown up along with that character.”
With “Clone Wars” completed, the question looms where and when additional “Star Wars” projects will land, beyond those already announced for Disney+, which is heavily leveraging the brand to push the streaming service into homes.
Filoni’s long history working within George Lucas’ universe means his efforts could be channeled into live-action or animated fare. Regarding the latter, the producer said he hopes to be a resource to animators, helping “teach them the way that ‘Star Wars’ should be made.”
His own choices, he said, will be dictated by what makes the most sense creatively, depending on the material. “Where is the story I want to tell going to work best now,” he said, adding, “I’m glad I have opportunities.”
The final two episodes of “Star Wars: The Clone Wars” will premiere May 1 and May 4 on Disney+.