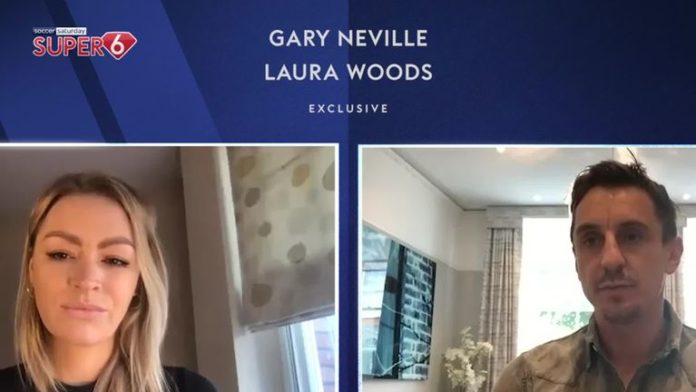 From being stuck in a lift to Roy Keane’s beard, from general well-being to the resumption of football, Gary Neville answers all in a Super 6 Q&A.

Although many are missing football during these unprecedented times, it is important to take a step back and put health to the forefront, with Neville revealing how he is coping with the current lockdown.

“I have had my ups and downs as you can imagine. I have got into a routine but I don’t usually get down,” he said.

“I am too busy and have so much to look forward to, but weekends have been a real struggle. It is OK when you are doing things like this and you have things to look forward to during the day but then Saturday and Sunday, what do you do? I am not a television person or one for watching loads of series, so it has been hard work.

“Going from being busy every day to very little is difficult, and you do realise what you have. I will not take for granted what we do and how lucky we are to go to the football grounds, watch football and enjoy it.”

Although most working people are accustomed to video calls now, there have been times when it has not quite gone to plan.

When asked what has been his most awkward moment so far in lockdown, Neville recalled: “We were supposed to have Claudio Ranieri on, as it was the anniversary of Leicester winning the league a few years ago, and he just didn’t make it on! Apparently it was the WiFi.

“I think in the future, a lot more meetings will happen like this. It is not good for broadcasting or television, because when you are all in that room together there is that energy that exists. You are cutting across each other quite often, not knowing who is going to come in next, and it can look unprofessional at times. It isn’t great but we are where we are.

“I think the weirdest thing is when you think people are frozen but they’re not. I think ‘x’ is frozen and then they reply with ‘I’m not’. They’re just bored listening to you!”

When speaking about The Football Show, which is done via video call, Sky Sports presenter Laura Woods said: “You are keeping a bit of normality for everyone at home. I think people do appreciate it.”

The beauty of Roy Keane

In a recent edition of The Football Show, Sky Sports presenter Dave Jones asked Roy Keane about his beard, which did not go down as well as he would have hoped.

Neville said: “As he started reading the question I was like ‘Dave, you’re not going to go there are you?’, asking Roy about his beard or his hair. It’s not going to get you anywhere! He got the glare and the smirk, which left me and Carragher laughing like crazy, a bit like Muttley!”

With Salford out of Sky Bet League Two action at the moment, there were lots of questions surrounding how the players were coping during the lockdown period as well as the overall effect on the Sky Bet EFL.

“We have a weekly session with the chairman, sporting director and manager, and the medical team,” Neville said. “They are doing their Zoom training sessions like everyone else. I wish we would have filmed the workouts live, so that the fans or any others could have joined in, a little bit Joe Wicks style.

“They just want football to return. On the medical side, there are reservations about it because of the health and safety issues.

“Being a Football League club owner, I do want the football season to finish as a football person, whether it is as an ex-pro, my Sky Sports role, or being the owner of a club.

“I also feel a great sense of responsibility towards the Salford players and staff. Would I expose them to any health risk? No, I wouldn’t, and that is the problem we have at the moment. We would be putting the people we work with at risk, and that is the bit that I or the medical team cannot get their head around. You would be subjecting them to a heightened risk.

“I keep hearing people saying that we are putting health first. If we do, then we wouldn’t even risk playing football. I get it. They are worried at lower league levels about the finance being there, the money, the contracts. At Salford, we have 14 players that are on loan or out of contract in two months.

“There are hundreds up and down the country, where if football doesn’t take place, they won’t have any sight of income. You have got genuine worry, and this is why they want to and are desperate to play.

“The massive problem in the EFL is that you have 700 players, and 50 per cent are out of contract on June 30, so if the current season was finished in September/October, you would have completely different squads. One thing for sure, clubs that are releasing players will not be paying them afterwards into October/November, they do not have the money to, and I would not expect them to.

“You are talking about the integrity of the competition being completely lost. There would be differing squads finishing the same season, so I think it would be an impossible thing to do, because of these players being out of contract.

“That is the big thing. You have the positive voice on one shoulder saying go for it, where you know the risks and they will accept the risks they will be taking. The negative voice, where some of these players have respiratory problems, asthma or diabetes, and you picture one of those in hospital and think of the guilt you would feel trying to make them play those games because of economic reasons and employment reasons.

“I understand it is a difficult moment in time. I have not heard anyone say yet that health does not come first. If this is the case, the economic element comes second, and you would make the executive decision to only return at a safe time to do so.”

There have been many conversations about the prospect of finishing the 2019/20 season, although the former Manchester United full-back does remain optimistic in the hope of the remainder of the campaign being completed.

“I think at Premier League level, as much as I would have a giggle, it would be ridiculous not to give Liverpool the league,” Neville said.

“However, when you get to the bottom of the league, I think it is equally as ridiculous to relegate teams when it is so close. I didn’t realise the challenges that would exist in League One if you were to run it on points-per-game. Wycombe could go from eighth to second with their game in hand. You would have a war on your hands.

“We have seen that leagues have been awarded in some countries and in others they have null and voided it. I don’t think that will be an option with what is happening at Premier League level.

“It is bizarre and surreal to everyone what is going on at the moment. Football does play second fiddle, but I cannot imagine winning a trophy without completing the season. Liverpool are so far in front and are worthy champions, and I think they will be awarded the title. They will not want it like this. They will want to do it the right way and finish the season off, but that is going to be very difficult unless there is a miracle quarantine solution that comes up in the next few weeks.

“I mentioned that there could be a couple of places in Europe which could host Premier League matches and allow them to finish the season off there, where there were no cases and it would be much safer, if the Premier League wants to do so.”

Would you rather be stuck in a lift with Jamie Carragher or Roy Keane?

“I think Roy. He is charming, funny and has good conversation. That’s not to say that Jamie isn’t charming or funny. It is that screech in your ear. I have it for four hours on Monday Night Football – imagine it for a couple of days.”

What is the most iconic memorabilia you have?

“I don’t have memorabilia in any house I have lived in.” Although that is the case, Gary did reveal this…

Out of all the players you have played with, who had the strangest personality?

“I wouldn’t say strangest, but Gazza [Paul Gascoigne] was the biggest personality I played with. He was unique. The things he used to do were just mad, but funny. I loved it.

“I was serious and always did the professional things, and always eat at the right times. You then have the complete opposite in an England dressing room in Gazza. All players were tolerant of each other, and differing characters. He is definitely the biggest personality I played with. He was a good lad.

“I never got frustrated by him. He would do things properly on a football pitch and when you are at a tournament for four or five weeks you need characters like that to keep you going. It gives you that differing perspective and he always tried to do that.

“It was sad when he got left out of the 1998 tournament. It was a big blow to the rest of the squad, as everyone loved him being there. There are very few characters like him in the game in terms of the way he would make you laugh constantly. It was his duty to enjoy himself.”