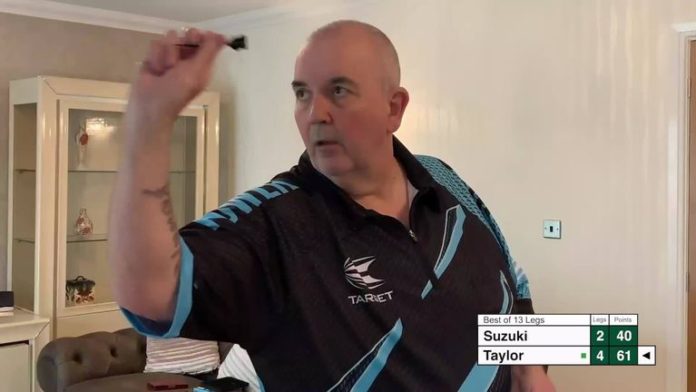 Taylor will be back in ‘Darts At Home’ action next week when he faces the history-maker, Fallon Sherrock

Phil Taylor secured a 7-5 victory over Mikuru Suzuki in a soft-tip darts from home exhibition.

With the game being played on a Nexus board, each 180 that was recorded raised money for charity.

However, from there the Japanese star stormed back into the tie. She burst back into contention at 3-2, hitting a 150 checkout in the fifth leg.

Although Taylor rallied and re-established a three-leg lead, he couldn’t quite shake off the ‘Miracle’ who kept in touch, snapping at his heels.

Suzuki pulled it back to 5-5, despite the Stoke-on-Trent man enjoying a nine-point superior average.

Eventually, Taylor used all his experience in sealing the win with a 12-darter.