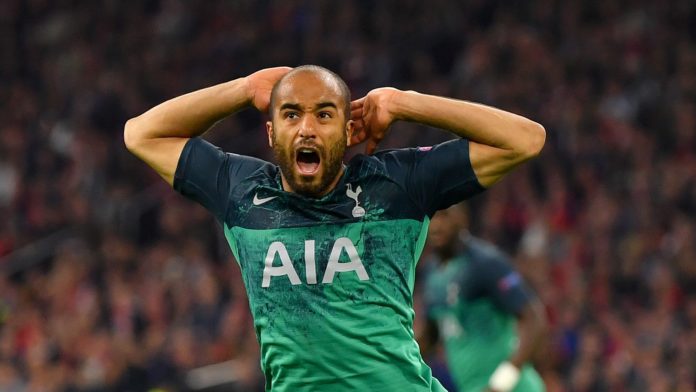 It’s a year to the day since Lucas Moura’s dramatic late hat-trick saw Tottenham follow in Liverpool’s footsteps to reach their maiden Champions League final against all odds.

Spurs had an absolute mountain to climb after capitulating in the first half of their semi-final second leg in Amsterdam but, out of nowhere, they conjured up arguably the greatest second-half performance in the club’s history.

Twelve months on, relive the night Spurs snatched victory from the jaws of defeat to set up the second-ever all-English Champions League final with Sky Sports’ match report…

Tottenham will face Liverpool in an all-English Champions League final after producing a stunning second-half comeback against Ajax to rival the Reds’ miracle win over Barcelona.

Just 24 hours after Liverpool staged one of the greatest-ever fightbacks at Anfield, Lucas Moura scored a second-half hat-trick to secure a 3-2 win in Amsterdam and send Tottenham through to the final in Madrid on away goals.

Trailing 1-0 from the first leg, Spurs looked out of it at half-time after a towering header from Matthijs de Ligt and a curling finish from Hakim Ziyech but Lucas stuck twice inside four minutes to level the scores early in the second half.

And the Brazilian completed his remarkable hat-trick deep into stoppage time to seal the unlikeliest of victories that left Spurs boss Mauricio Pochettino in tears and sent Spurs into their first European Cup final.

Man of the match: Lucas Moura

After Liverpool proved anything is possible against Barcelona, there was always a sense of belief in Tottenham even when they went behind to De Ligt’s header from a corner on five minutes.

The response from Mauricio Pochettino’s side was bullish, and they went closest to making it 1-1 when Heung-Min Son, who was suspended for the first leg, struck the post with a shot from the left just moments after the Ajax opener.

Lucas and Dele Alli also forced Ajax goalkeeper Andre Onana into two good saves as the visitors continued to dominate – but a hammer blow came shortly before half-time when Dusan Tadic capitalised on a mistake from Kieran Trippier in midfield and set up Ziyech to sweep the ball above and beyond Hugo Lloris and make it 2-0.

Tottenham were back out ready for the second half some time before Ajax, however, signalling that they were not giving up without a fight – and the introduction of Fernando Llorente changed the dynamic in their favour.

Spurs made two changes from the side that lost 1-0 at Bournemouth on Saturday as Victor Wanyama and Jan Vertonghen replaced Eric Dier and Davinson Sanchez. Erik Lamela made the bench, but it’s too soon for a Harry Kane return.

The Spaniard was a different problem for Ajax and allowed Lucas to attack from in behind him, and Ajax were clearly rattled when a speedy counter-attack saw Alli put Lucas through to finish firmly into the bottom corner.

Llorente then thought he had equalised with an effort that was saved from close range, but the ball dropped to Lucas and he found the bottom corner for a second time.

Spurs then did everything in search of the winner, including moving Moussa Sissoko to right-back to be able to throw on another forward in the returning Erik Lamela, but it almost cost them when Ziyech went up the other end and struck the post late on.

As stoppage time arrived, the Ajax fans and some Ajax players thought their place in the final was sealed, celebrating as Spurs forced a corner at the death. But instead of referee blowing his full-time whistle, Moura pounced on a cute Alli ball through after Llorente’s knockdown and swept home to spark pandemonium in the away end of the Amsterdam Arena, with the Ajax players flat out on the floor.

Man of the match – Lucas Moura

Described as a “superhero” by Mauricio Pochettino. Lucas got Spurs back into the game with two goals in 204 seconds after the break and then showed fantastic composure to slot in the winner in injury-time.

“Thank you, football”. Those were the words of Mauricio Pochettino afterwards and everyone understood.

After Liverpool turned around a three-goal deficit in 90 minutes to win their semi-final against Barcelona on Tuesday, Tottenham pulled off the feat in 45 manic minutes to leave Ajax heartbroken in Amsterdam. Spurs are in the Champions League final.

Spurs boss Mauricio Pochettino: “I said before my players were heroes – now they are superheroes. The most important thing I want to say is congratulations to them – they own the football. They delivered the job.

“To go to the final is close to a miracle. Nobody believed in us in the beginning of the season. But we fully deserve to win tonight and be there.”

How Spurs heroes fared on a historic night in Amsterdam..

For the third night in a row, the footballing world marvelled on social media at what they had witnessed. There was a mix of shock and joy across social media, and we rounded up the best of it…

Scenes in the dressing room!!

Yesterday, it was a Barcelona vs Ajax final. 🤷🏼‍♂️

That’s why football is the best sport on the planet, bar none…

The best photographs from Tottenham’s incredible comeback against Ajax at the Johan Cruyff Arena.