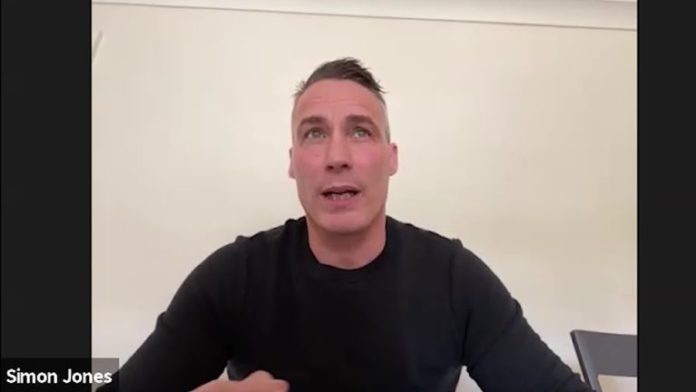 Watch day three of the 2005 Edgbaston Test in full from 11.30am on Saturday on Sky Sports Cricket

We are replaying the epic Edgbaston Ashes Test from 2005 on Sky Sports this week, culminating in a thrilling day four on Sunday.

England ended day two with a lead of 124, after dismissing Australia for 308 and reaching 25-1 by stumps in their second innings.

Seamer Simon Jones played a key role on the second day, pinning Justin Langer lbw for 82 to trigger the tourists slipping from 262-5 in reply to England’s 407 all out on day one.

Here are Jones’ reflections on dismissing Langer, bowling to “nightmare” Ricky Ponting and when he developed his reverse-swing expertise…

“It’s hard work [bowling at Langer and Matthew Hayden]. For me, their side when you saw it on paper was a team of legends from one to 11 and the lads waiting to come in were legends as well.

“I’d never you say you fear anyone as a bowler but you respect them. So, when I’m bowling against those boys, I’m thinking my line and length have to be impeccable. If I err slightly, I’m going.

“There was a lot of pressure on us as a bowling group, we had to work hard but that’s why we were in the side and had played so well together for the previous four years.

“Langer was looking dangerous. When you get to this level, you have to try and out-think the batsman.

“I had bowled a couple of overs of reverse swing and then thought, ‘right, now is the time to go straight on him’ and it worked. You could see his head fall over – you rarely see that from him – and it was a pivotal moment.

“[Bowling to Ponting] was a nightmare! He is so attacking in the way he comes at you. He is always looking for a fight, to take you on, to put you out the game.

“He was one of the wickets we valued the most. I have had him out a couple of times and it is relief more than anything!

“The keys to reverse swing are keeping the ball dry – keep anyone with sweaty hands away – but I learned my trade in 2001 in the academy.

“I had a long chat with Troy Cooley. He said I was never going to open the bowling unless someone got injured so I had to find a way of getting in the side and being valued in the middle overs.

“He said the only way I was going to do that was bowling with an old ball and being able to bowl reverse swing.

“We would have net sessions in the academy and the lads would pick up the newest, hardest cherry they could find, while I was looking for one that looked like it had been chewed by a dog! That’s where I learned it.

“I remember Straussy [Sir Andrew Strauss] walking out of a net once as I got the ball going and he didn’t like it! It was one of those things you had to keep working on and it came to fruition in this series.”

Watch day three of the Edgbaston Test in full from 11.30am on Saturday on Sky Sports Cricket – and don’t miss the Watchalong of day four, with Michael Vaughan, Marcus Trescothick, Shane Warne, Kevin Pietersen and Steve Harmison, from 12pm on Sunday on the same channel.