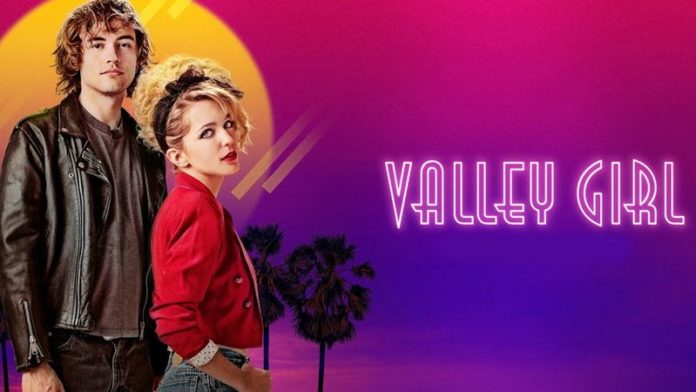 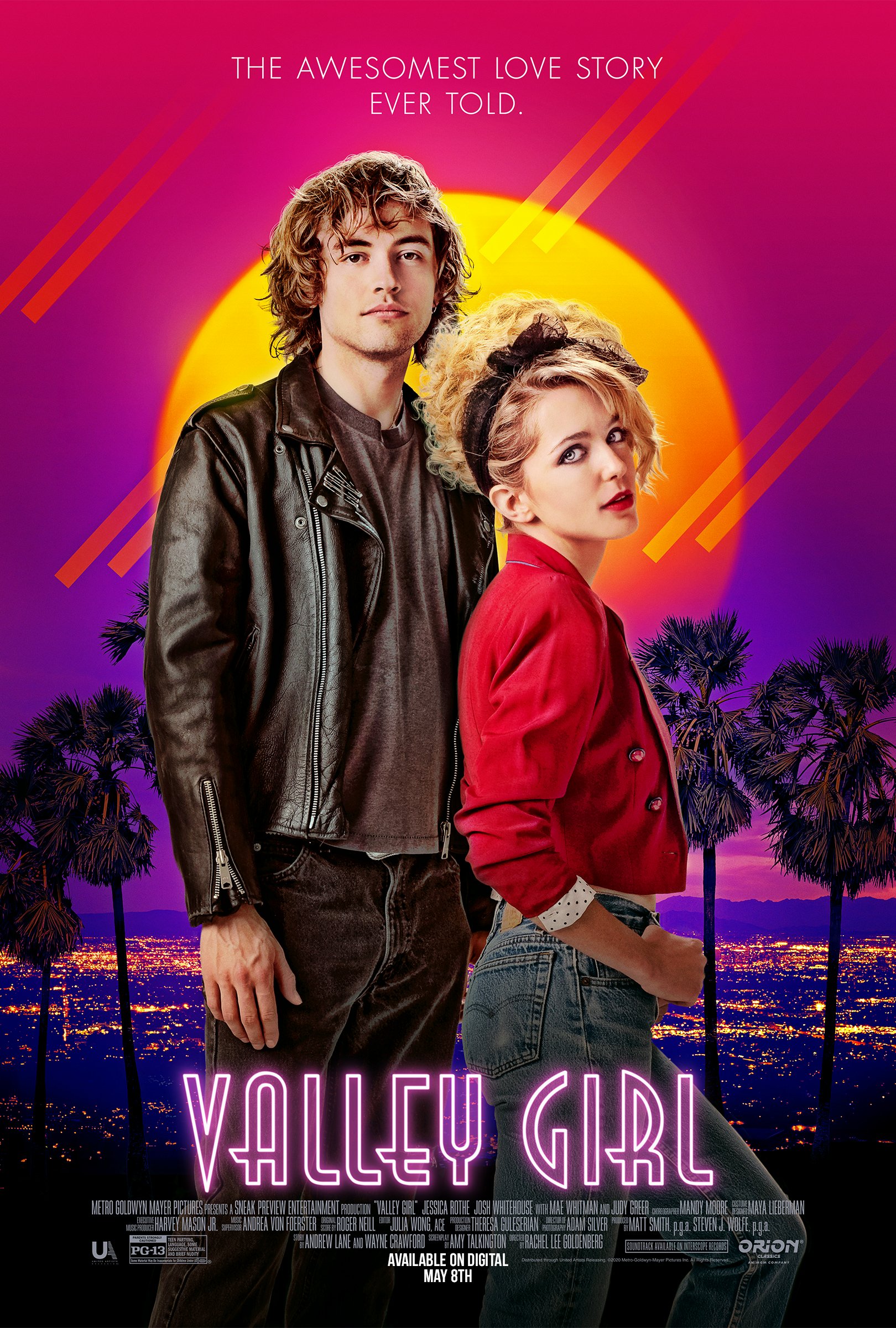 Set to a new wave ’80s soundtrack, a pair of young lovers from different backgrounds defy their parents and friends to stay together. A musical adaptation of the 1983 film.

Rachel Lee Goldenberg’s Valley Girl is a colorful, lively, even whimsical musical with fun performances and a killer soundtrack. It’s also a fairly shallow remake of the 1983 comedy of the same name starring Nicolas Cage and Deborah Foreman. Your enjoyment will depend on your feelings towards the original film and also your thoughts on heavy-handed nostalgia and musicals in general.

For me, I enjoyed the simplistic nature of Goldenberg’s remake. The film has pop, humor and heart; and is, for lack of a better word, cute. Splashy musical numbers abound, all of them remixes of classic 80s pop songs, which means conversations suddenly evolve into wild neon-drenched chorus numbers that serve to tell the simple story of girl-meets-loves-hates-loves-boy we’ve seen countless times before. Except here, you get the ever-charming Jessica Rothe and a supporting cast featuring Josh Whitehouse, Judy Greer, Chloe Bennet, Mae Whitman, Alicia Silverstone and a scene-stealing Logan Paul.

Notice how none of the above actors are under the age of 30. Yeah, this is one of those high school movies where everyone on the men’s basketball team has receding hairlines, drive really expensive cars, never go to class and live in a larger-than-life world where people are defined by general stereotypes — read: jocks are dumb, nerds wear glasses, punks dress in leather, etc. When characters speak, they talk like screenwriters — “People have holes where they’re not supposed to – I almost got stabbed by that person’s hair!” — and when they perform simple activities around town, such as attend a yoga session, they dress like supermodels.

Even the conundrum faced by Rothe’s character is silly. Should she date the school jock, a meathead whose idea of romance is to write her name on the bare asses of his mates, or run away with the more rebellious kid on the other side of town who plays in a rock band, has irresistible charisma and is cultured enough to speak Spanish? Decisions, decisions.

I can forgive such follies, because, well, this is fantasy.

Valley Girl uses its simplistic premise to celebrate the past as seen through the wistful eyes of an adult looking back at her life. (In this case, Alicia Silverstone plays Rothe as an adult, relaying her teenage experiences to her stubborn daughter.) This is 80s fan fiction, as one astute Twitter user described it; a paper-thin celebration of the popular trends of a bygone era that never explores the actual era. In fact, the only glimpse we get of the outside world is Sally Ride’s trip to the moon. But maybe that’s the point. These characters live in a bubble completely cut off from the rest of the world our protagonist longs to explore.

Again, your enjoyment will depend on how you view such things. I imagine most audiences will forgive the shallow plot and focus instead on the catchy tunes and plucky characters. Who needs depth when you’ve got a cast full of beautiful people singing a sprawling rendition of David Bowie’s Under Pressure?

I guess my biggest gripe comes from the potential this film had to tell a truly captivating story — something akin to George Lucas’ American Graffiti. All the pieces are in place for an interesting film about love, hope, loss, regret and — oh, shit! Are they really singing “Take On Me”? That’s a great 80s tune.

Wait, where was I?

Ah, yes. Also, why remake Valley Girl? And if you must remake Valley Girl, why remake it as a musical? I suppose name appeal goes a long way in capturing an audience’s attention. Though I imagine this film could have been called Grease 3 and no one would have noticed a diff — oh, whoa! “Girls Just Wanna Have Fun”! Haven’t heard that one in years!

Valley Girl is a nostalgia-fueled romp through the ’80s that glosses over its dim-witted plot with catchy musical numbers and a solid cast.

Valley Girl is streaming now on Digital and you can order your copy here!