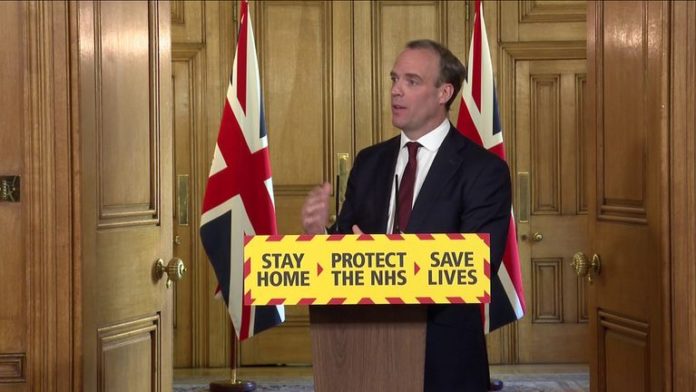 Ahead of the government’s announcement on Sunday night, Sky Sports News’ chief reporter Bryan Swanson looks at the next steps for a return to Premier League action.

It will help, but don’t expect all the answers.

The government has stressed the need for an extremely cautious easing of lockdown restrictions and football will be listening for any specific mentions by the Prime Minister.

Foreign secretary Dominic Raab said the Premier League’s return would “lift the nation”, but they have yet to receive the green light to resume group training, let alone play matches.

Deputy chief constable Mark Roberts, the head of the UK Football Police Unit, believes football needs a “stark reminder” about the reality of how a return of the season needs to look.

The Premier League is well aware of the huge reputational risk by rolling out a return too quickly and public health will always remain its No 1 priority.

Can the Premier League confirm a date for games to resume?

No, not yet. June 8 and 12 was discussed by clubs a few weeks ago, but they are only discussing the next phase of Project Restart, which is a safe return to training in groups.

Clubs have pencilled in a date of May 18 to resume training, the same day as a further shareholder meeting, but it is still too soon to confirm when games will, or can, resume.

Everybody is encouraged by the Bundesliga’s return to games this month but, quite simply, Germany is at a more advanced stage of containing the virus than the UK.

The Premier League’s next move is entirely dependent on the government.

Are players involved in talks?

Yes, league officials will meet player representatives and members of the League Managers Association in the coming days.

Clubs acknowledge the need for players and managers to agree to their plans, or Project Restart will never swing into action. No player can be forced to play if they feel unwilling to do so.

The Premier League’s priority, in the first instance, is to receive assurances that player safety will not be compromised with a return to group training.

It is then for clubs to reassure players that their safety will not be compromised in any way.

Are some doctors still unhappy?

“Football has to be patient,” Dr Michel D’Hooghe, chairman of the FIFA Medical Committee, told Sky Sports News in April.

His personal opinion is that the game should not resume until September, but medical experts do not agree on a number of issues.

Questions have been asked, at the Premier League’s request, and four club doctors raised concerns.

The Premier League will have been irritated by media leaks and talks have been taking place, in private, all week prior to the government review.

We have yet to receive a formal update from the Premier League Doctors Group.

Can we expect a vote on Project Restart?

There is not anticipated to be one big vote, rather a collective call to agree on different phases.

Historically, the Premier League avoids a vote, unless it absolutely has to. At least 14 clubs must agree to any major rule change.

The last significant vote was in 2017 over the transfer window closing before the opening day of the season, and that was the tightest of calls.

But this is a much more important issue and, as we have already seen in the past few weeks, each club has different issues in overcoming the coronavirus pandemic.

Yes, technically, but there is no indication they would ever do so.

The full name of the competition is The Football Association Premier League, after clubs signed the Founder Members Agreement in July 1991 and established the basic principles of the league.

The FA is a special shareholder of the Premier League and can ‘exercise a vote on certain specific issues’, which include promotion and relegation, the name of the league and its number of teams.

But just because it holds a special share, it does not guarantee it would ever use it, and the FA has no role in the day-to-day running of the Premier League.

FA chairman Greg Clarke, who is on the FA Board, said on April 7: “We are committed to finishing the professional football season. However, we may not be able to finish the season as football is not a priority, human life is.

“We must have a plan to ensure that English football is not decimated should this season be lost and next season blighted.”

On March 17, FA chief executive Mark Bullingham, also on the FA Board, told Sky Sports News: “Everyone’s priority is to finish the season.”

Promotion and relegation are at the very heart of the Premier League, and to remove either would open up serious questions about its integrity.

What about the financial implications?

Sky Sports News reported on Friday that clubs will be warned that the season not restarting could cost them more than relegation.

The bottom-six clubs have reservations about proposals to finish the season by playing at neutral grounds, and they believe giving up home advantage could affect their chances of staying up and compromise the integrity of the competition.

Aston Villa, Brighton and Watford are so far the only clubs to publicly voice their concerns about the proposal to finish the campaign at neutral grounds.

However, every club is committed to finishing the season.

What about five substitutes and VAR?

Football lawmakers, IFAB, have announced they will allow up to five substitutions in normal time. IFAB agreed with FIFA’s request to ‘protect player welfare’.

Lawmakers also introduced the intriguing possibility of suspending the use of video assistant referees, by allowing competitions to ditch VAR mid-season.

This is a new option on the table, so Premier League clubs will discuss these temporary measures in the coming weeks.

FIFA wants them to agree to the changes on substitutions, but it would be a considerable surprise if clubs agreed to drop VAR in the same season.

What are the key dates?

Following the government update on Sunday, clubs will meet on Monday morning before English football’s top administrators hold talks with the government on Thursday (May 14).

Discussions with players and managers are expected to take place on Tuesday and Wednesday.

Premier League clubs are scheduled to meet again on May 18, a week before UEFA has asked every top European league to provide an update on their plans. This update should include a proposed date and format.

On May 27, UEFA’s top executives will announce a decision over the remaining games in this season’s Champions League and Europa League.

This is a decisive month, and everybody is extremely conscious that the death toll continues to rise, on a daily basis, in the UK.