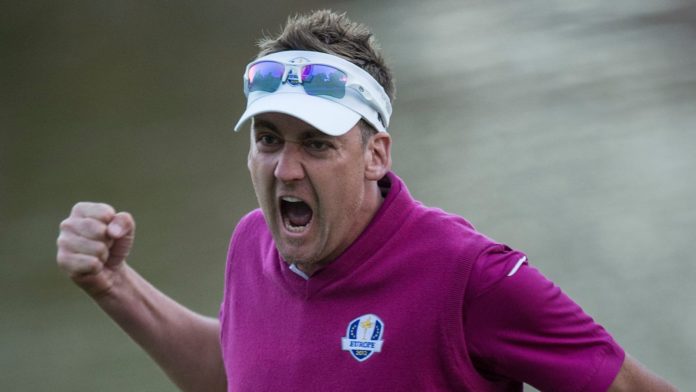 “I want to make that Ryder Cup team and if I do, and we have to play it behind closed doors, I’m going to embrace it 100 per cent”

European Ryder Cup stalwart Ian Poulter believes this year’s event should go ahead, even without fans.

The world’s top three players – Rory McIlroy, Jon Rahm and Brooks Koepka – have all stated their preference for the Ryder Cup to be postponed until 2021, should it prove impossible to have spectators at Whistling Straits this September.

Poulter disagrees: “I’m not saying ‘postpone it’ if there’s no fans,” he told Sky Sports News.

“I want to make that team and if I do, and we have to play it behind closed doors, I’m going to embrace it 100 per cent. It will be good for TV. It won’t be good from a players’ standpoint, there won’t be as much fun, because you won’t be able to feed off the energy of the fans.

“We would love to see a Ryder Cup with fans. We feed as a team, and we always have, off the fans. So if you take them away it’s going to be an extremely different feeling.

“I’d love to see the world be in a better place by September, and for one of these amazing companies to find a vaccine which would turn this thing on its head very, very quickly. It’s not looking likely, but miracles do happen.”

The world No 58 believes the qualification criteria to make the team has to change. As things stand, nine players qualify through a combination of the European and world points lists, with captain Padraig Harrington picking the final three.

“There are going to be guys that have weathered this storm well, and there’ll probably be some guys who haven’t weathered the storm well.

“A load of guys in the UK I know haven’t been playing golf at all and they’ve just been practicing in a net in the back garden. It’s not going to be easy to make that selection whether it’s 12 picks, six picks, four picks, however they go about it.”

The hiatus from tournament golf has given Poulter time to reflect on his own future. At the age of 44, he admits he has thought about Ryder Cup captaincy and has his sights set on the next time it’s played in the States.

“If they decided [to appoint me] for 2024 at Bethpage in New York, that would be quite enjoyable. I would be honoured to do it, and if I could do it on away soil and bring that trophy back to Europe that would be a pretty big feather in my cap.

“I would hope we could have an enjoyable week there. I know it’s obviously going to be loud and raucous, but I’m hoping I could have a great respect level from them because certainly as a team we’d have respect and would embrace the fans that week.”

The PGA Tour is hoping to resume tournament play on June 11 at the Charles Schwab Challenge in Texas, with the first four events at least being played behind closed doors.

Poulter intends to be one of the players teeing it up at Colonial Country Club that week, provided he’s “comfortable with the protocol around testing”. He believes players will share private travel to get between events, but has some doubts over some of the logistics involved.

“They would like us to stay in the same hotel if possible. Obviously, it’s not going to work for everyone. Having 300+ rooms in one hotel for players and caddies isn’t going to be an easy thing to pull off.

“The PGA Tour are doing an extensive job of making sure this will be as safe as possible. They are not leaving a stone unturned.”

He has sympathy for the 25 regular PGA Tour players, including the likes of Ryder Cup team-mates Tommy Fleetwood and Francesco Molinari, who are currently outside the USA and facing potential travel bans.

“I haven’t spoken to Tommy or Francesco. I believe the PGA Tour have been liaising with them to find a solution. I’m sure they will be allowed to come in [to America] to play.”