Home Culture Brassic star Joe Gilgun: ‘It’s a nightmare, not being in control of... 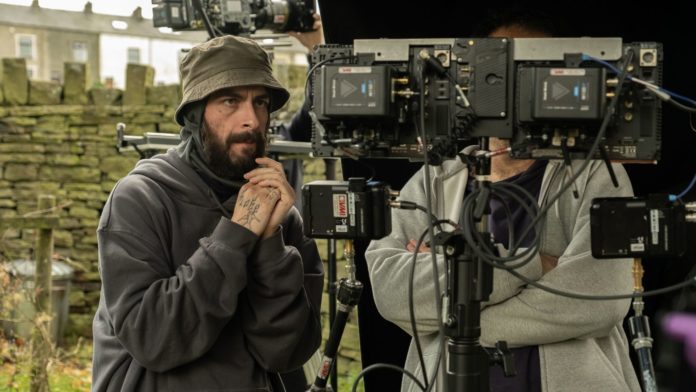 In the course of half an hour in conversation with Joe Gilgun, he covers subjects including but not limited to: dead whales in the jungle, what happened to Madge and Harold Bishop in Australian soap Neighbours, Strictly Come Dancing, coping with depression and the meaning of life.

Ask him a question and he’ll run with it, often in a different direction, telling you exactly what he thinks, honestly, enthusiastically and unfiltered.

When he begins by saying that for each interview he does – and that’s quite a few in recent weeks, with series two of his show, Brassic, just released – he really tries his best to “do something a little bit different”, you genuinely believe him.

Of course, that’s not his job; his answers should be determined by the questions he’s asked. But as anyone who has seen him in action will know, questions can quickly become meaningless when you’re in the company of someone as garrulous and fun as Joe Gilgun.

“Sorry, I go off on tangents, me,” he says apologetically, more than once.

Gilgun, who starred in Emmerdale before rising to fame as Woody in This Is England, last year turned to comedy with Brassic, the show he has co-created with BAFTA-winning writer Danny Brocklehurst, about a gang of mates scamming and robbing their way through life in a small northern town.

The first series was Sky’s biggest original comedy in years and season two has just been released to rave reviews. A third is already in the works.

Loosely autobiographical, like his character, Vinnie, Gilgun has bipolar disorder and is unflinching with his descriptions of how depression affects his life.

“I’ve laid myself as bare as I can with my mental health and my family and some of the naughtiness I’ve been up to,” he tells Sky News. “If that had been shunned by the public, that would have been really tough for me.”

Fortunately, the first series was “a massive success, a huge relief”.

Spoilers for Brassic season one ahead

At the end of series one, viewers saw Vinnie fake his own death. So now he’s back, like EastEnders’ Dirty Den, or Neighbours’ Harold Bishop.

Gilgun slaps his hands down. “I remember Harold Bishop getting washed up and Madge was left just looking out at the ocean, ‘where’s he gone?’ And he rolls in years later.

“I wonder, what was Harold doing in them years? I bet he was a drug baron or summat like that.”

“If I can be compared to Harold Bishop in any way, I’m happy. That was a real return to form that, our Harold coming back.”

But back to Brassic. “Oh yeah, well we wanted to leave everybody wondering what would come of it all. It’s important to leave your series on a dot dot dot.

“Breaking Bad is a good example. There’s never a single ep where it doesn’t leave you going, what the f*** happens next? I just have to know, and before you know it, nine hours of your life has completely f****** gone.”

“I’m fascinated by YouTube documentaries and s*** like that, ’10 brilliant things people have found in the back garden’, all that. ‘The most fascinating thing found in the woods.’ It’s just the best, dude.

“Like, in the jungle, everyone woke up one morning, this camp, this tribe, woke up and there was just a f****** massive whale in the middle of the jungle, rotting.”

I’m sceptical but yes, this did happen: a humpback whale, measuring 8m (26ft) long, was discovered around 15 metres (49ft) from the Atlantic Ocean on the island of Marajo, near the mouth of the Amazon River on the north east coast of Brazil last year.

“Yeah, tonnes of dead whale. Amazing! Out of the blue, no one knows where it came from. Well, they say they don’t…”

We clumsily move on from whales in the jungle to dancing, as Gilgun has a routine to celebrate Vinnie’s aliveness in the first episode of series two. Think backing dancers, a rainbow of pastel colours and some serious step-ball-changing.

Funnily enough, Gilgun is “not really a dancer, no”.

“In a club or a pub, you will not see me dance. I’m 36 and I’m from the north of England, like, it’s just not a vibe. For me, anyway. I shouldn’t say on behalf of all lads because I’m sure there’s some proper shapers out there. But I’m not one of ’em, so I did worry.

“We’d seen it on American films and things like that, these sort of out-the-blue dance routines, quite edgy and cool and with a bit of attitude, very unapologetic. Like 500 Days Of Summer, when he leaves that building, everyone’s looking at him and it all descends into this huge dance routine with cartoon birds and it’s beautifully done.

“We wanted to do that, we stole it a little bit. But, obviously, the concern is, do we have the budget to pull that off? We can’t half-arse this, if we’re gonna do it it has to be brilliant.

“I think I probably would have wanted to veto it… but the team around me are experienced and always do a great job at reassuring me that we’re not going to make a bunch of t**** of ourselves. And we didn’t! It’s bloody great!

“The worst part about it was, there’s a team of professional dancers behind me, so if I f*** up they all have to do it all over again… and obviously I’m like a habitual f*****-upperer. I can’t stop. Anyway, we got it in the end, it was a good day.”

Now he’s had the training, could Strictly Come Dancing be on the cards?

No, is the response we can print. Gilgun would rather eat his own genitals.

“Write that down and underline it twice,” he adds.

We move on again, to life in lockdown. For Gilgun, who spends long periods on his own and isn’t “massively social”, he says it hasn’t been too much of a change.

“I’m bipolar and ADHD and I do isolate a lot,” he says. “When I get depressed, I cut myself off, jobs and stuff like that.

“I’m on my own right now, I’m not a massive fan of people and I’m not massively social. I think people assume that of me, a lot of lads do, lads want to take me out for a beer. But I’m not really that guy, I’m not social.

“My routine hasn’t really changed. It’s like, I just can’t go out for a coffee now so I have it indoors.”

His eyes light up. In lockdown, Gilgun has treated himself to a Nespresso machine.

“You had one of them? They’re fantastic! I have about nine brews a day.”

Like everyone else, he says, there’s “days where I’m thriving, days where I’m miserable”. But he follows routines to keep his head straight.

“It’s just important to remind yourself that it’s the scenario, it isn’t you,” he says. “But if you are sat on your arse eating Doritos and by the end of the week you feel like s***, well… get off your arse.

“Dude, I’m the most miserable **** this side of Manchester; the depression I suffer with, it’s ruthless. And I get on that treadmill… If I can do it, a reprobate drug addict, anybody can.

“It is dangerous not to, you get stuck in that rut. You have to have a bit of discipline and balance in your days.

“I’m scoring each day out of 10, I write a journal about each day… and then look at the week and go right, which were me s*** days so at the end of the month, I know what days I struggle on and I use this isolation to analyse my behaviour a little bit.”

Today, the score is all over the place, he says.

“It’s a nightmare, not being in control of your own emotions, it’s hard work. So today is one of them days.

“I just make the most of my good days. Today it’s up and down but I got a good run this morning, my legs didn’t hurt. I’ll make a point of remembering that,” – he pretends to write – “good run today, did well.”

He’s worried he sounds corny, but says it’s important to “look after your mind and body”. And he says the trust that has been put in him to get Brassic on screen has changed his life and the way he sees himself.

He explains: “It’s the little things when you’ve got mental health issues. Eating right, taking your medicine. You’ve got to get it right.”

Towards the end of shooting the second season of Brassic, Gilgun says he struggled.

“I think the tail-end of shooting season two I went through a lot. But I really remember thinking, well, maybe I’m capable of a bit more than I give myself credit for. You know?”