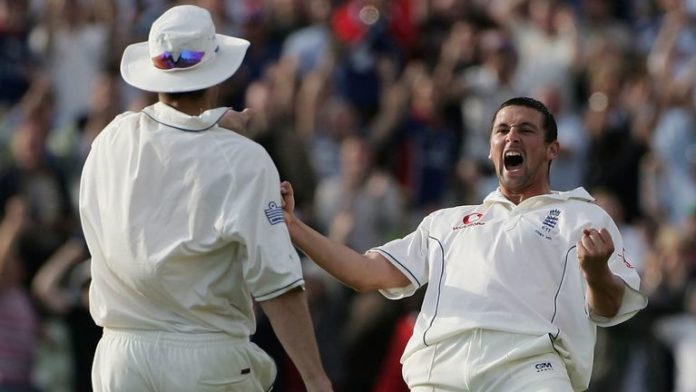 We are replaying the epic Edgbaston Ashes Test from 2005 on Sky Sports this week, culminating in a thrilling day four on Sunday.

England seamer Steve Harmison struck with the final delivery of day three – bowling a befuddled Michael Clarke with a delicious slower ball – to leave Australia 175-8 and needing a further 107 runs to move 2-0 ahead.

Harmison’s peach capped a day that belonged to Andrew Flintoff, with the all-rounder thumping 73 from 86 balls, and adding 51 with last man Simon Jones, as England set Australia 282 to win, before dismissing Justin Langer and Ricky Ponting in a quite sensational over.

“I’m not sure where that ball came from, to be honest!

“My slower ball has been labelled by two of my former colleagues – Marcus Trescothick and Andrew Flintoff, who fielded at slip for my whole career – as the worst in the history of the game.

“But it worked that day and Michael Clarke didn’t pick it.

“We needed it right at the end of the day as if Clarke came out the next morning with 107 to win I think it would have obviously been much tougher to get over the line.

“The whole series took a ridiculous amount out of you. You could see with the emotion in the celebration at the end [when I got Clarke out].

“That was my first wicket in the Test match – I thought I bowled really well in the match but got nothing!

“I was coming off the back of eight wickets at Lord’s, but I bowled 10 times better in my first spell in the first innings at Edgbaston.

“I just didn’t get a wicket. If it wasn’t for Justin Langer and Ricky Ponting, I might have picked up three or four, which shows you how good they were.

“The whole series but that whole Test in particular, the emotions [were huge]. That was arguably from 9.30am on the first morning when Glenn McGrath stood on the ball.

“We, 10 Englishman and a South African [Kevin Pietersen], were 45 metres away celebrating because the great Glenn McGrath, Australia’s best bowler, was now injured.

“Then Ponting won the toss and bowled first on the flattest wicket ever.

“The crowd on Saturday was fantastic and then you had the emotion at the end when we thought, ‘we’ve finally done it, we can’t lose from here, surely?'”

Watch the watchalong of day four, with Harmison, Michael Vaughan, Marcus Trescothick, Shane Warne and Kevin Pietersen, from 12pm on Sunday on Sky Sports Cricket. You can watch uninterrupted coverage at the same time on our YouTube channel and Sky Sports Main Event.