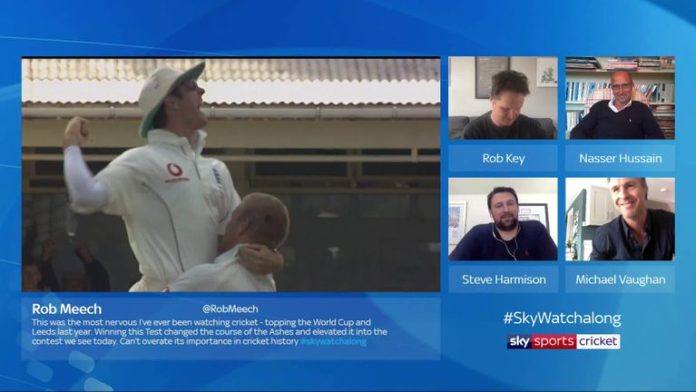 “The emotion of that week was just frightening,” recalls Harmison; relive the thrilling tension of the 2nd Ashes Test with the players involved

‘The greatest series of all time’ and its most thrilling Test match were on the menu on Sunday as we went back in time to the 2005 Ashes and Edgbaston in the latest Sky Sports Cricket Watchalong.

Having been handily beaten in the first Test at Lord’s, England were confident of levelling the series up at 1-1 heading into the fourth day of the second Test in Birmingham. The home side needed just two wickets to win, while Australia required a further 107 to win.

But, of course, it wouldn’t be that simple and what subsequently unfolded on August 8, 2005, will go down as one of the most thrilling finishes in the history of Test cricket.

Click on the video above to watch some of the highlights from Sunday’s Watchalong, with England’s winning captain Michael Vaughan, as well as Kevin Pietersen, Marcus Trescothick, Steve Harmison and Shane Warne joining Rob Key and Nasser Hussain to look back on the drama that unfolded 15 years ago…

Did Ricky Ponting make the wrong decision at the toss?

“Punter’s decision to bowl first was the just worst decision ever by any captain!”

WARNE recalls his reaction to the Australian captain’s decision…

“Nasser [Hussain] goes down as one of those people that had one of the worst-ever decisions when he said ‘we’ll have a bowl, thanks’ at Brisbane [in the 2002/03 Ashes], but at least at The Gabba the ball swings or does something on day one. This was a road and the ball did nothing.

“Punter’s [Ponting’s] decision to bowl first was just the worst decision ever, by any captain. So take a back seat, Nas, Punter has got your back.”

Australia need 107 with two wickets in hand; could they do it?

WARNE: “The night before, in the last over, Steve Harmison bowled Michael Clarke with a slower ball with what proved to be the last ball of the day. Needing 107, you’ve got myself, Brett Lee and Michael Kasprowicz left, but I still believed we had a chance.

“England’s attack in that series was fantastic. The ball was reverse swinging, they were bowling 90mph plus, Harmy and Freddie at their best, but I just had to hang in there and then you never know.”

“Nothing in my cricketing career was as difficult as facing South Africa, in South Africa.” – @KP24

KEVIN PIETERSEN: “We knew Australia could do something. We were quite positive because the first few days had gone to plan, but we still knew that there was a chance that that guy on screen [Warne] could do something special, with everything that he had done in the game.

“Of course we were in control, but the aura that great Australia team had, nothing was dead certain. They were kings of cricket at that time.”

Did Warne sledge during the series?

PIETERSEN: “He didn’t hammer me too much. Nothing compared to ‘The Sherminator’ [Ian Bell]. He wouldn’t even be at the wicket yet and Warney would hammer him.”

Still 62 runs shy of their 282-run target, Warne accidentally kicks over his stumps…

WARNE still doesn’t know how he did it…

“My plan in this series was to get right across my stumps when batting, but then here I went too far across and somehow my foot hit the stumps – I still don’t know how?! I could not believe it.”

“I still don’t know how it hit the stumps!” 😂@ShaneWarne did not enjoy seeing that again!

The skipper, MICHAEL VAUGHAN, tried his best to keep his emotions in check…

“The players are always looking at you, and I needed the bowlers to stay calm. There’s a little bit of panic inside the mind and behind those glasses, but I was thinking, you’ve got Freddie and Harmison bowling near-on 90mph and Kasprowicz who, no disrespect, can’t bat really.

“I always feel in these kinds of situations, for those batting, it’s just as hard for them as us in the field. I kept on saying to myself, ‘it’s just one ball’. One mistake, one umpiring decision, one piece of genius from Freddie or Harmison.

“Surely they’ll make a mistake? Surely an opportunity will arise? By this time, the Aussie section in the crowd, god, they were getting noisy!”

Meanwhile, Vaughan’s charges were struggling to stay quite so calm…

STEVE HARMISON: “My mind wasn’t flagging but my body was. My legs had more or less gone from all the emotion that had gone into the game.

“When I was fielding at fine leg, I was shaking like a leaf, thinking ‘what are we going to go if we lose here?’ But with ball in hand, 22 yards away, I was actually quite calm.”

“I was shaking like a leaf when I was out in the field!” 🍁@Harmy611 joins us with England needing one wicket. 😰

MARCUS TRESCOTHICK: “I remember talking to Andrew Strauss when they needed about 10 or 12, and saying ‘how are we coming back from this?’ I thought there was no was no way back. They just weren’t missing the ball like we were expecting them to.”

Lee inside-edges Harmison past his stumps for four; Australia need 15 to win…

HARMISON: “That was the moment I thought ‘we’re done’, that inside edge. It was 88mph that delivery, and you see a wry smile on my face that says ‘that’s it’.

“Everything was going against us. I thought we were finished – they had been going from 107, with two wickets to go. We’d thrown the kitchen sink at them; Lee had ran five singles without his bat. He was like a voodoo doll for me and Fred. I thought it was fate that they’d get over the line.”

“I’d expected to have had four pints by now on Broad Street!” 🍻

Australia need four runs to win; Harmison would get one more over…

HARMISON: “I was thinking, it’s all or nothing now in terms of my aggression. The bouncer or the yorker, they were my go-to delivieries – how you’d normally look to bowl to a tailender.

“Me and Vaughany had a conversation just before, saying ‘ do we bring him up [the fielder on the point boundary]?’ And Michael said, ‘no, leave him there for Lee and we’ll get one more chance at Kaspro’. Fortunately, we did.”

VAUGHAN: “What do you reckon? Two metres either side and that was four.”

Harmison gets a bouncer on the money to Kasprowicz, who gloves it behind to Geraint Jones – ENGLAND WIN!

“I was thinking how do I pick this team up if we lose this game?”@MichaelVaughan looks back on that Edbgaston win.

HARMISON: “It’s better than the ball I bowled at Brisbane!

“The emotion of that week was just frightening! We’d gone from being the best team in the world going into Lord’s, then Glenn McGrath taking the whole thing away from us, thinking ‘here we go again’. To then go to Edgbaston, McGrath standing on the ball, to potentially winning it, potentially losing, to winning again.

“At the end of this Test match, there was a bit of calmness in the dressing room. Not only did we think we were back in the series, we thought we could win it. A sense of ‘the hard work starts now’; we’ve got to go to Old Trafford and work harder.”

VAUGHAN: “If we’d have lost that game, I think it could possibly have even been a whitewash. The team wouldn’t have been able to respond – we’d played so well.

“I was thinking ‘how do I pick this team up if we lose this game?’ I don’t think there would have been any positivity to take to Old Trafford just a few days later.

“We were in the series now. We had a sniff. The players were confident, particularly the pivotal members of the side. Flintoff playing the game he did, it was time to start getting a little excited about winning the Ashes.”