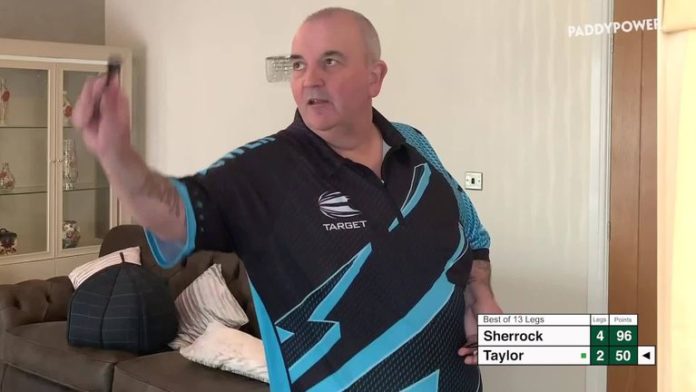 Lockdown darts of the highest order as Taylor and Sherrock raise £16,200 for NHS Heroes charity

Phil Taylor proved he was still the king as he edged out the brilliant Fallon Sherrock in a last-leg thriller of the latest Darts From Home Series on Thursday.

The Queen of the Palace, playing from her house in Milton Keynes, went up against the 16-time world champion, Taylor in Stoke-on-Trent.

In a match full of drama, Sherrock came agonisingly close to a nine-dart finish, but it was Taylor who used all his darting prowess to strike late on for a pulsating 7-6 victory.

Both players used soft-tip dart boards where the score was controlled electronically. Some big scores were expected due to the larger segments, while Sherrock and Taylor both agreed beforehand that the bullseye would not be used during a natural checkout, making it steel-tip rules.

Taylor, now 59, held throw in the opening leg of an eagerly-awaited contest, taking out D16, before landing two maximums in the next leg to leave 51. But Sherrock responded with a magnificent 155 checkout under pressure to make it level.

Sherrock, who shot to global stardom at the 2020 PDC World Championship by winning two matches in a week en route to the last 32 in an historical run at Alexandra Palace, nailed a maximum and then a 140 to set up a shot against the darts in leg three.

‘The Power’ was soon back in business when he scored 131 to set up tops and when he returned to the oche he nailed it at the first time of asking.

Following the break, a nerveless Sherrock held throw by sinking 96 in two darts to make it 4-2, but Taylor, who retired from the sport following his 2018 World Championship final defeat to Rob Cross, checked out 50 to stay in contention.

Sherrock once again showed she could finishing under pressure by taking out an outstanding 130 to make it 5-3. ‘The Power’ sunk a clinical 79 to keep the heat on, and after Sherrock missed two darts at 81, Taylor used all his years of experience to strike with a cool 103 to level things up at 5-5.

In a dramatic 11th leg, Sherrock looked to be on for a nine-dart finish after nailing seven perfect arrows, but she missed the target going for T19, which riled commentator Wayne Mardle.

She was ultimately punished as Taylor took out 46 to make it three legs on the spin and move one-leg away from victory.

Taylor vs Sherrock: The stats

The maximums were raining in as Sherrock stayed calm to send the clash into a last-leg decider by finishing off 41.

Taylor had the darts and in a fitting finale Sherrock found herself on another nine-dart finish but she failed to hit T20 with her seventh dart, leaving the legendary Taylor on 167 for the match.

In typical Phil Taylor fashion he finished it off on the bullseye to celebrate a sensational 7-6 victory from his living room.